Can past return information predict the future?

If you are like most investors then you have probably wondered whether the past performance of an asset manager has any value in predicting future performance. Our in-house research suggests that - depending on how you measure "past performance" it can matter a lot...

In this month’s issue of our newsletter we’ve looked at a question that undoubtedly occupies a lot of active investors: is the past performance of a fund a good predictor of a fund’s future performance? We used Morningstar’s database to answer this question for the Global Equity Large Cap category. We started our analysis in January 2009, since before this point the database appears to have a pretty serious survivorship bias problem. The latter term implies that before 2009 virtually no active funds in the database “died” (merged or liquidated) – while, in reality, of course many funds ceased to exist before this point. Ever since 2009, on average 5.6% of the active funds population delisted every year. Over the 6 remaining years of data we created a portfolio that invested 1 Euro in retail funds that had the best alpha (risk-adjusted return) over a trailing 3-year period, and financed this by going “short” in the worst performing funds (which means their returns are subtracted from the return we receive from the best funds). In reality of course, we cannot short badly performing funds – but for our application it effectively shows the relative performance of “good” funds (with excellent alphas) compared to “bad” funds (with negative alpha). Each of these funds were held in the portfolio for 6-months. The graph we included speaks volumes as to the merits of looking at a fund’s past alpha to determine its future return. 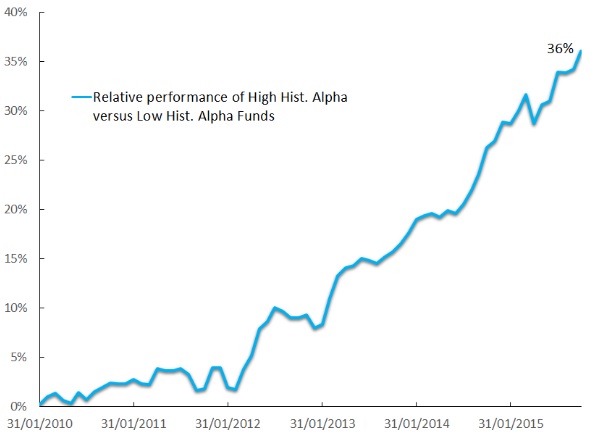 While the funds above the 90th percentile in alpha ranking boast a monthly return of 1.03%, the managers that scored below the 10th percentile continued to do bad, recording an average monthly return of merely 0.55% over the 2010-2015 period. Moreover, there is a remarkably high stability in the choice of managers over the years. Navigator, for instance, has been on the long side for the last 3 years.

The same story does not hold when we look at the alpha over shorter time periods. The alpha of a fund over a one year period seems to have almost no correlation with the future return of a fund. It thus appears that alpha’s over shorter periods are more likely to be influenced by luck. After all, a bad fund manager that - by chance - made a single good sector bet can easily present impressive alpha-statistics over a 12-month period. On the other hand, good managers can experience a temporary setback. Over longer periods these effects should diminish. For a bad manager a single sector bet might not be enough to still obtain a decent alpha over a 3-year period, while a good manager will have likely made up for his temporary setback over this longer timeframe.

In conclusion, we can state that the alpha of funds - on average - appears to be a reliable predictor for future returns, but only if calculated over a sufficiently long time period.