The junk pain-train has arrived!

In April the stock markets were able to add another month to the rally that started mid-February. The MSCI World NR recorded a satisfactory gain of around 1% during the month. While this is only slightly better than the MSCI ACWI’s performance, it is obvious that amongst the emerging markets there was a clear discrepancy between the returns of Asia (-1.8%) and Latin-America (+5.4%). In reality, however, this “regional” difference was driven by the incredible comeback that we have seen from Basic Materials (+24.5%) and Oil producers (+9.1%) since the turn of the year. Indeed, the year-to-date return of the MSCI ACWI (-3.5%) more than pales in comparison.

If you look into the data a bit deeper you will find that these good sector returns are disproportionally driven by those companies that had an abysmal trailing return and rather depressed earnings forecasts over the past few years. For instance, if – within the Basic Materials sector - you had invested a single Euro in the stocks with the worst 3-year performance and rebalanced this portfolio every week, you would have ended up with 2.17 Euro at the end of April – a gain of 4.7% every week over the last 5 months! Should you have tried to select highest quality mining corporations (decent earnings, stable cash flows, etc.) this same Euro would have declined to a mere 86 cents – a performance that is considerably worse than the MSCI ACWI’s, losing 0.9% per week. 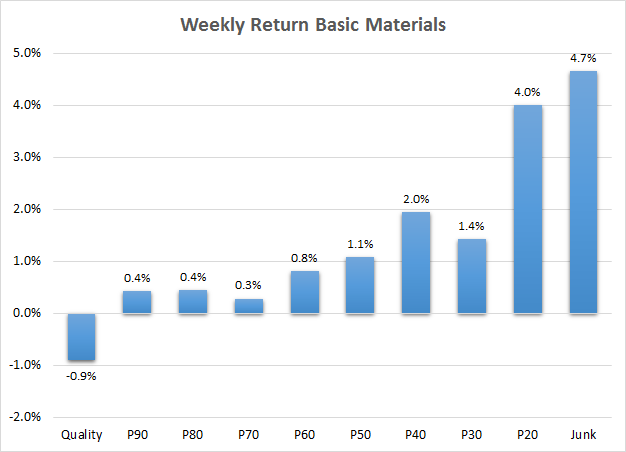 While the bar chart above shows that playing the lottery can sometimes net you huge gains, last year should still serve as a necessary reminder that your chances at winning are slim. Indeed, in the previous year the roles were reversed as investors fled towards quality within the sector. If you had followed the same strategy in 2015 the quality stocks would have outperformed the junk stocks by no less than 46% over the year. Consequently chances are that the funds that are outperforming at the moment have a very outspoken sector allocation towards Basic Materials and Oil and/or are overweighting “junky” (low earnings, volatile) stocks. So unless they are excellent sector/factor timers, the biggest winners of 2016 are also very likely to have been 2015’s largest underperformers.

Nevertheless, it is undoubtedly true that our penchant for quality at a reasonable price as opposed to junky stocks caused us to miss out on an important upswing in a very specific market segment, which in turn led Vector Navigator to lag behind the market in April. Year-to-date Navigator is now underperforming the MSCI ACWI by 2%. Yet, we are confident that the situation will soon normalize and we do not want to get caught in the fad of the month! After all, it cannot be sustainable for these junky basic material companies to keep growing at a rate of about a 1000% per year…

While Vector Flexible also suffered from the basic materials rally, the fund had increased its protection around the turn of the year which allowed it to gain a head start during the early months of 2016. Year-to-date its performance is on-par with that of the All Countries index, albeit with a much lower volatility.