While markets initially shrugged off concerns about the Corona outbreak, the realization that the virus could have serious effects on global growth started to dawn on investors towards the end of February. In little over a week, indices from around the globe traded in their year-to-date gains for – at times – double digit losses.

The MSCI World Index ended February down 7.6%. Emerging markets had a decidedly better month, losing ‘only’ 5.2%. This may sound counterintuitive, given the fact that COVID-19 originated in Wuhan, but it can be explained by the declining rate of new infections in Asia. Thus far, China, which has a somewhat more autocratic leadership style, seems to be much more adept at controlling the spread of the virus than many other countries.

Another big event we saw was the start of an oil price war. Some fear that lower oil prices will lead to disinflation, but we feel that a steep reduction in oil prices could be viewed as a gift of the oil producing countries & companies to the rest of the world, and do not necessarily see this as a threat to the world economy but rather as a stimulus to it.

Vector Navigator ended February on a 7.0% loss, which is slightly better than the index, but still clearly the return of a fund that is fully exposed to the whims of the stock market. Vector Flexible on the other hand, where we have been increasing our hedge for some time already, was positioned extremely well to handle the market volatility COVID-19 brought with it. Given the hedge ratio of approximately 65% at month-end and the alpha of our stock selection the fund lost just 1.9% during the month.

The concerns that were first raised in February have in the meantime evolved to outright panic and, as we are writing this letter, many markets have lost a quarter of their value, and are returning to levels first seen in early 2015.

We are hoping that authorities worldwide will now take all necessary steps to contain the pandemic and that the problem will soon start getting smaller instead of larger, as it did in China. If it does, there’s a very high chance that markets will have returned to substantially higher levels one year from now. Though the human costs of pandemics are dreadful, the long-run economic effects are not always so.

PS: empirically, there is little evidence to support the notion that strong declines in oil prices generally cause sell-offs on the stock market. In the graph below for instance we plotted 11 top to bottom drawdowns in oil prices that were greater than 30% over a one-year period. The table looks into stock market performance (S&P500) in the year preceding and following this “event”. Generally, one can see that before the local minimum is reached stock markets show lacklustre performance – over the past eleven events they’re slightly bearish (-0.8%). In the subsequent year, however, companies tended to profit from the reduction in their input prices (+15.7%). 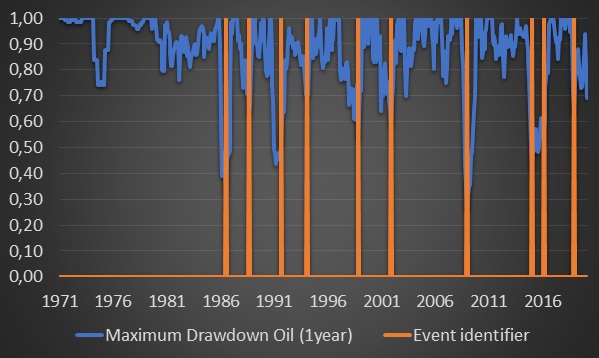 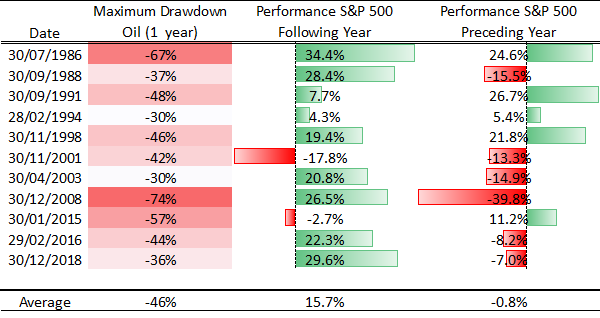